skip to main | skip to sidebar

Ode to the Birds

Sunday morning I awoke to what sounded like someone pounding something outside my window.  It was dawn and I was not happy.  I went outside to see who was being so rude. I saw nothing.

Next morning, dawn, pounding,  I'm not happy.  I get up look out and see a robin attacking the neighbor's garage windows.  At 5:45 in the morning  I figure they don't want to be disturbed  so I get the ladder and some cardboard to tape over the windows. I leave a note.  Good, mission accomplished.

Later that day, pounding coming from the living room.  I look and the robin looks back.  I put up a curtain. Mission accomplished.

This morning I am wakened by pounding.  I follow the sound to the furnace room.  I see little marks all over the window from the robin's beak..  poor, worn out robin.  I cover the window with a piece of matt board.  Mission accomplished.

Cardinals and Robins are very territorial birds.  They see their reflection in a window and attack thinking it is an intruder.  Sometimes they will keep attacking until they die and, if they don't die, they will remember and come back for more the next season.

It's been awhile since I've had any inspiration to paint.  Other matters have been grabbing my attention.

My jewelry life has taken over.  A new gallery in Seattle and a new way of doing things.  I'm finding out what it's like to step up to the 'Seattle' plate.

When I told my daughter of my good fortune she reminded me of the time, many years ago, when we stood in this gallery and I said, "Someday I will have my jewelry here."


Now I think about those canvases that have been sitting in the corner, waiting for me and I think, "Someday I'll paint with oils".

To do that I need to get back to the basics. 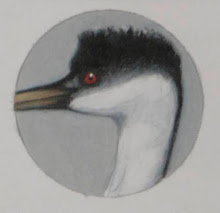 Kathleen Faulkner
I am a jewelry artist and painter living in Cascadia, along the Salish Sea in the northwest corner of Washington State. My home and studio is in Anacortes, a town on an island, surrounded by stories and tales and memories. This place inspires me.

Welcome to my world

I can be contacted at: kathleenfaulkner@outlook.com

All images are copyright Kathleen Faulkner unless otherwise specified and may not used without permission.

What is 'Art Jewelry'?